A year or so after my Dad passed, I remember discovering a book titled We Are Eternal by Robert Brown. Brown’s work, among others, brought me great comfort at a time when death seemed a fearfully inevitable end to living. Exploring my spirituality and life after death allowed me to make peace with the concept of dying, which I have now come to trust as a transition into another realm – our spiritual home. When our time comes to leave this physical world and our physical bodies, our souls live on. We are eternal.

Fear not death. Live each day as if it is your FIRST, not your last. Live with a sense of childlike wonder and curiosity. For in this lifetime and lifetimes beyond – you are safe and protected in the arms of Love.

I am still travelling New Zealand with my man. Today, we took a trip to the Cape Reinga to visit one of the most significant cultural sites in Aotearoa (New Zealand). For Maori, this is where the persons spirit comes after death and departs for their eternal home.

What makes the Cape Reinga so special is at this most Northern Point of New Zealand, you can witness two oceans collide – the Pacific Ocean and the Tasman. It really was a spectacular view, almost like life meeting death in a beautiful collision of white waves.

I have been enjoying some delicious delicacies in New Zealand. I have tried Pāua, Blue Nose and an array of other fresh seafood. One thing I did pass on was Kina. A type of sea urchin, Kina is collected from the sea, cut open and eaten straight from it’s casing. Here you can see my partner’s cousin opening their catch, and my man enjoying his yummy feed! Salty! 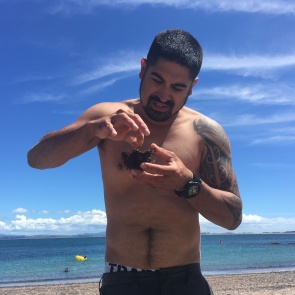 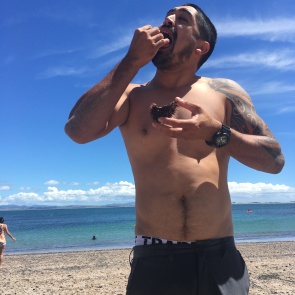 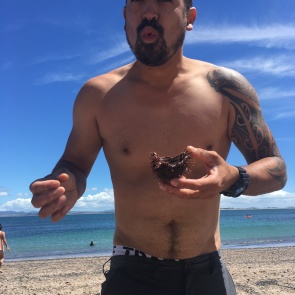 Today, I’d love to share Bob Dylan’s, Forever Young as a tribute to my Dad. And a reminder to us all to live courageously, to stand up right and be strong. And may we stay forever young at heart.

I’d like to leave you with Dainty M’s post, Dealing With Separation. Sometimes, separation can be hard. Even when we we know it is an inevitable part of life. Here, Mfon offers some insightful tips to ease the discomfort and pain of departure.

I’m wishing you all a peaceful Sunday from across the miles. May you remain eternally at peace with yourself and others. Remember, life is to be savoured and enjoyed, so waste it not in fearful thoughts of yesterdays and tomorrows. Embrace living NOW.

Day Fifteen: Your Voice Will Find You

Today’s Prompt: Think about an event you’ve attended and loved. Your hometown’s annual fair. That life-changing music festival. A conference that shifted your worldview. Imagine you’re told it will be cancelled forever or taken over by an evil corporate force.

How does that make you feel?

She had visited 5 months prior, in September, while we were sound asleep in our beds. She shook our TV from the unit and shattered our wall mirror just shortly after 4:30am. She left the whole city talking, wondering; making her presence known with the occasional tremor here and there. And then she seemed to depart. The ground settled, and as the rumbles became less frequent – life, once again, returned to normal. Mother Nature’s visit in the early hours of the morning had almost been forgotten; but when she returned five months later – she came with a vengeance.

The day she decided to unleash her fury – I was standing in the staff room on the top floor of our five storey office building in Christchurch, New Zealand. I had lived in Christchurch for almost a year; a move I’d made after flipping heads for New Zealand three times in a row with a dollar coin. The move proved to be a happy one – I had already met my current partner of five years and had fallen completely head over heels in love with him, his accent and his beautiful home town. With its stunning landscapes and mesmerising sunsets – Christchurch was truly breath-taking. From the kitchen at work, we had a striking 180 degree view of the vibrant central business district and its surrounding countryside – and from the main office space, we could see the other magnificent 180 degree view.

“Do you fancy coming to Cashel Mall with me?” Kelly asked. Kelly liked walking on her lunch breaks – she could survive a nine hour shift on an apple and just a few nuts and seeds. I, on the other hand, would pack at least two or three Tupperware containers of food to sustain me; I politely declined. I much preferred to fill my boots with food whilst admiring the view in the thirty minutes permitted off of the phones. Occasionally, I would pop around the corner to the Sushi Bar below, it was close enough to eat and still feel somewhat rested before returning to the relentless monotony of dialling. In the past when I’d wandered a little further afield to grab some fresh air – I’d returned to the office to find the evil red tea cup flashing rudely on my computer screen, the numbers counting down into the negatives as a reminder that I was late! Cashel Mall was a good ten minute walk away – logic told me that by the time we reached the mall and had a brief look around that it would be time to come back. Thankfully, Kelly decided that she didn’t want to go alone – a decision that quite possibly saved her life.

I tipped my healthy stir fry onto a plate ready to zap it with a deathly dose of electromagnetic waves – and that’s when I felt it. It began as a steady, rhythmic pulsating motion, growing with sudden and rapid intensity. I barely had time to react. I dropped to my knee and sheltered beneath the narrow breakfast bar behind me, clinging tightly as I was wrenched back and forth; my shoulders screaming with the sheer force of her wrath. I was pinned to the ground by her violent rocking, unable to stand or move of my own accord. My knee slid back and forth across the metal rail that separated tile from carpet, as the building swayed and jolted beneath me. A freshly boiled pot of noodles ran across the same spot, burning at my torn flesh – I could see it but couldn’t feel it – the pain masked by the adrenaline surging through my veins as I contemplated the end. I’d like to think that I thought something significant in that moment – but truth be told, my initial thoughts were Fuck! Fuck! Fuck! Fuck! Fuck! I was then overtaken with an innate instinct to survive. I fell completely silent and simply held on tight, listening to the crashing of ceramic plates as they flung from the cupboards with each ferocious jolt. I could hear the frightened screams of my colleagues, but was unable to budge until the juddering finally came to a halt. My chest contained a charging rhino which threatened to break out and bolt at any moment. I was up within seconds, my eyes scanning the disarrayed office for any casualties – apart from a few stunned faces, there was nobody in any serious or critical condition.

Some stayed to do a head count, but myself and a younger, pregnant girl took the stairs – neither of us wanting to risk being in the building should an aftershock strike. With bated breath, we descended the five flights of stairs. No words were spoken, both of us intent on reaching the bottom before she struck again. When we finally reached the exit, the frames surrounding the glass doors were so twisted that we were unable to escape. Passers-by noticed, and one man freed us by breaking the glass with some fallen debris. Though relieved to be out of the building – nothing could prepare us for what we were met with once outside.

Standing on the pavement, it quickly became apparent that not everyone’s buildings had withstood the earth’s tremendous jolts. Our relief at escaping our office soon faded as we entered the sea of frightened faces wandering around in a state of shock. All around, buildings had fallen like decks of cards; piles of rubble strewn across the pavements. My mind raced as I tried to come to terms with what lay beneath the wreckage. The Sushi place that I visited weekly was now a pile of bricks; the Newsagents beside it was nothing but rubble, its yellow sign broken in half. I began to tremble, feeling utterly helpless. A wave of guilt ran through me as I realised that, although I had survived, many others had not. I was shook from my state of shock as fresh bouts of aftershocks hit the city. A flurry of screams came from all around as people began to panic. The sound of sirens was deafening as ambulances and paramedics rushed to aid. A hand grabbed me through the crowd of people – it was Kelly urging me to safety. “Let’s get out of here,” she said. “It’s not safe.” 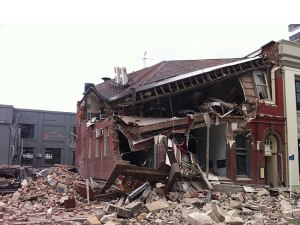 Many buildings were reduced to ruins“Let’s get out of here”, she said. “It’s not safe.”

We slowly made our way through the confused crowds, our feet becoming drenched from the mud and liquefaction which had risen through the cracks in the pavement. As we approached my Corolla, it was tire deep in mud and water. We stopped and glanced back over that woeful scene. To our horror, Christchurch Cathedral, which had stood so grand and majestic in the centre of Christchurch’s Cathedral Square, was now crumbled and in ruins; its broken spire a chilling reminder of the fallen city we were leaving behind.

185 lives were lost that day. One of them was Kelly’s friend Joe, who was crushed beneath falling debris whilst shopping in Cashel Mall. Witnessing her grief and heart ache was utterly soul destroying. Like me, she struggled with feelings of guilt; both unable to fully rejoice in our survival when so many others had been less fortunate. That being said, the devastation left by the earthquake certainly put life into perspective again, and I will forever feel immense gratitude that my loved ones, myself included, were spared that day. Life is truly precious.

So when prompted to imagine how I would feel if an important event was cancelled or taken over, truth be told, I can’t. When I think of the events of the February 22nd earthquake, and consider other countries who are facing and have faced the loss of their homes, their livelihoods and their loved ones as a result of natural disasters – a cancelled event, to me at least, seems mildly inconsequential.